The Swiss artist Rickli has set out to survey the act of surveillance, or, more concretely, present an experience of being positioned in an impossible space; both present and absent, both synchronic and diachronic. It is an insertion into the midst of a technological flow in order to create an aesthetics of information. The surveillance in the work is part of scientific observation. In it the information predictably flows from one point to another. The end point in this case is the gallery space of the Schering Stiftung in Berlin, a black box set up as an artistic parallel ‘ground control’ mixing live and recorded streams of audiovisual signals. Present yet unpronounced is the question of how data alters affective states. 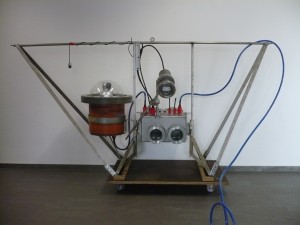 The room is dominated by a large reconstruction of an, in reality, small underwater station, the RemOs, that was submerged into the arctic waters off Spitsbergen. The installation has inverted the functioning of the machine so that it has two projectors instead of two cameras and six loudspeakers instead of microphones. Here Rickli explores the difference between technics (techne), the craft and potential to create, and the activity that can create and modify new techniques: technology. But the artist’s intervention, the inversion of the machine, is on a conceptual level not his but merely a visualisation of how the RemOs has become a media machine for the behavioural biology scientists that use it for their, in the exhibition, unexplained ends. The artistic literalness (in reconstructing the machine) serves to illustrate in a palpable manner the convergence of recording and transmission that is becoming integral too all technological devices in the present moment.

On one wall two photographs from the camera/projectors are projected with a three-minute time lap. No fish are to be seen. It feels as though we peer into space, at stars and galaxies of, for us, abstract matter. Deep-sea exploration is yet again, as with Piccard and Cousteau, another departure form the surface: space exploration. This is also why we so easily accept that the information will flow only one way: from the media machine suspended in an inhuman world to the human world of the gallery. No point in relaying back, from Berlin, images of the visitor in the gallery to fish and stars. Science’s search for natural frontiers now appears to flee from the human world of media in which their media machines have been created. Letting this suspicion run free we can even start to imagine that the scientists feel more at home in the depths of the ocean where cool disinterest can still rule. If the aesthetic judgment of the beautiful looks for that, in the words of Kant, is “purposiveness without purpose”, it makes sense for the artist, using a manufactured media construction of the scientists’ encounter, to follow. 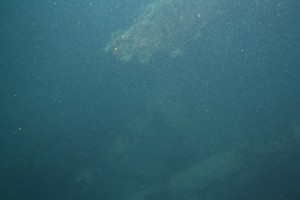 Science as an artistic practice predictably calls out for an artistic middleman. Rickli has also done his own additions to the RemOs, namely the six microphones. It is in this intervention that the underwater station has also become an artistic machine, postulating that the sound recordings are of no practical use for Rickli’s collaborator Professor Philipp Fischer. The question is what they do for Rickli that the cameras cannot do. Their main effect is to create affect in the spectator; affect understood as a (following Brian Massumi) non-conscious and asubjective presence as opposed to derivative and conscious emotions. Affects do not have contents, they are just “there”. The sonic landscapes induce the visitor to approach the rest of the exhibition aesthetically.  The sound becomes an extension of the gallery framing, as though it were an intensified version of its usually serious silence. There is no immediate mimetic effect, we do not find ourselves transported to the depths of the sea. The noise of the sea, of science observing the sea, can instead give the feeling that we are in a gallery, yet another inversion back to the realm of art. Listening to fish does not have the end of hearing fish, the aesthetic experience might be that which we seek in order not to have to have an end.

On three walls various video screens can be seen in which mostly webcam images (live and recorded) played at various speeds, give us images of Spitsbergen and the research station by Ny Ålesund. There is also a camera recording the outside of the machine recording the sea. Here is, thus, panoptical science. Cold as the ice of the Arctic. A shape without content. In one monitor time is compressed and re-arranged until white lines are formed by the daylight hours and black lines by the night. This is when Rickli finally comes closest to being able to see nature through the eyes of the scientists, a gaze that again purifies that which is being observed, empties it of previous meaning. But although this nature is beautiful, it is at the same time eerie like something threateningly universal and eternal. It almost feels like a relief to turn back to the installation and the promise of nature being an image born out of media technology.

This entry was posted in In English, Konst and tagged Brian Massumi, Immanuel Kant. Bookmark the permalink.